Almeria city boasts hundreds of bars lining the cobbled boulevards and hidden away down side streets – and why only go to one when you can go to many on a tapas trail!

I have fond memories of my Birmingham student life, going round the pubs of Selly Oak and Harborne, but my days of downing a pint and a packet of cheese and onion crisps at each stop have thankfully moved on to the much more civilised ‘caña’ (small beer) or wine with appetisers ranging from a slice of cheese to more gourmet treats, on offer here.

Having a drink and a tapa with friends has become a traditional pastime in Spain, especially in Andalusia from where some legends claim it originates.

So when my orchestra ‘compañera’ Jeanne W. asked me to show her and her friend Marianne a night on the town, I was happy to oblige.

The trail can be anything you make it (although there are formal ‘rutas de tapas’ from time to time where bars compete to win a prize), but it basically consists of moving from bar to bar, having a drink and a tapa at each one.

There are many stories about the origins of tapas – and a quick look at Wikipedia will give them to you in great detail.

There are two main theories however, both based on the fact that the Spanish word ‘tapa’ means ‘lid’. The first (and I believe more likely) is that a piece of food was placed over a glass to prevent flies or dust getting in, and the other is that workers were encouraged to have a small snack with their drink to absorb the alcohol and ‘put a lid on’ its effects.

The first time the definition of tapas as food appeared in the dictionary was 1956, but stories of tapas abound from the middle ages.

The legends often involve royal figures such as the Catholic Monarchs, Isabel and Ferdinand who on a visit to Cadiz stopped at a fly infested bar, where the owner placed a slice of cheese over their drinks, reportedly saying: “Here is your tapa, your majesties”.

Having a drink and a tapa is now so strongly associated with Spanish culture that it is de rigueur for holiday makers and the concept has been exported the world over, with Spanish tapas bars cropping up all over the place in the UK.

One of the most popular streets for tapas in Almeria is Calle Jovellanos, home to the city’s oldest bar, Casa Puga, dating back to the 19th century.

I wanted to show Jeanne and Marianne a bit more of the city first though, so we started in the centre at popular bar Capitol Centro (as mentioned in my previous blog post Between Worlds).

There we enjoyed a glass of a crisp verdejo white wine with two tapas each (we were hungry!) including chicken curry, a goat cheese ‘montadito’ (on thin toast) and bacalao (cod) with pisto (a ratatouille type sauce). In total it came to 15 euros and the girls gave it a “very good” 4 out 5.

Next we moved on to a bar I had been introduced to by some Spanish friends, in an area of town known as ‘Las Cuatro Calles’, popular for its ‘happening vibe’ on weekend nights.

The bar, El Postigo, is known for its meat ‘al la brasa’, or flame grilled, especially the pork ribs, which we all opted to sample. At 8.50 euros for a round of drinks and ribs it was a very reasonable option, but the others found the sheer meatiness of it all a little “overwhelming and messy”. For dedicated meat eaters though I would definitely recommend it.

Then we headed over to Calle Jovellanos where Jeanne and Marianne were keen to try Casa Puga. 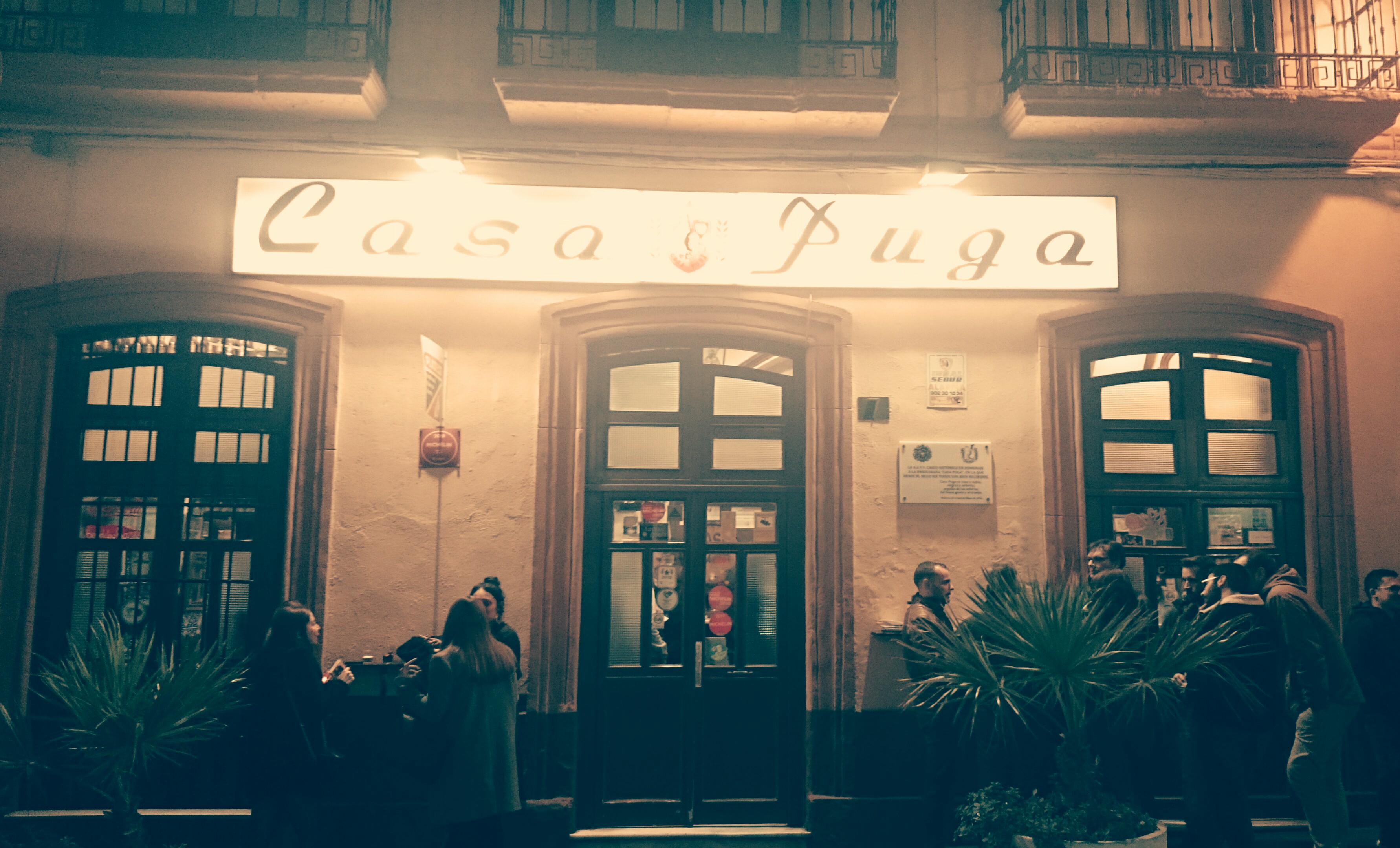 However after taking one look through the door and seeing how packed it was, they decided to go for a more ‘tranquilo’ option, and we continued up the road to a Morrocan bar called Aljaima.

(Casa Puga is definitely worth going to though for its Spanish ambience and traditional decor of tiled walls and hanging ‘jamones’. Arrive as it opens at midday or 8pm and you should be able to find a seat at the bar.)

The Aljaima is a favourite of mine (not to be confused with the Teteria Almedina previously reviewed) as the tapas and wine are both excellent and I like the camel stools and stained glass windows.

You enter through imposing wooden doors that Jeanne said she might not have dared to open had she been on her own, but don’t be deterred, inside they are really friendly!

The others both chose basmati rice with curried chicken which they said was excellent, giving it a 5 out of 5, while I went for the couscous. I also recommended the chicken bastela – a traditional delicacy of sweet chicken pie – but neither of them liked it! (All the more for me!) The bill was 12 euros in total and despite the rejected pie Jeanne and Marianne loved the place.

Our final stop of the night (four bars in four hours but we could have moved on more quickly if it hadn’t been for so much chatting!) was at Nuestra Tierra at the top of the street. This bar prides itself on sourcing local food and recipes, and then giving them a gourmet twist. It’s great for good quality cheese and jamon, but also more adventurous delights, often with a Japanese feel as the chef trained for a while there.

So Marianne loved her stir fried vegetables while Jeanne went for lightly battered bacalao and I had crispy fried cheese in honey and sesame seeds. The wine was also up to standard and the girls voted the bar their overall favourite with 4.5 out of 5.

(Who knows if the last bar always ends up being the favourite though, as the alcohol intake increases!?)

Anyway a good night was had by all on their first tapas trail, and I’m sure it won’t be the last!

However, enough of all this socialising for me! I now have to knuckle down and earn some money so that I can continue to enjoy my exciting new La Chanca life! It may take a while to find a ‘proper’ job, so in the meantime I will try to earn a buck or two with ‘pop up’ activities – and if any one would like to take me up on the one below, perhaps my socialising can continue after all!!

Are you a blog follower who fancies following in our footsteps? I am available for guided tapas tours lunchtimes and evenings, as well as visits to La Chanca and city walking tours. All by personal arrangement. Contact me on emma.v.randle@gmail.com.

4 thoughts on “On the tapas trail”