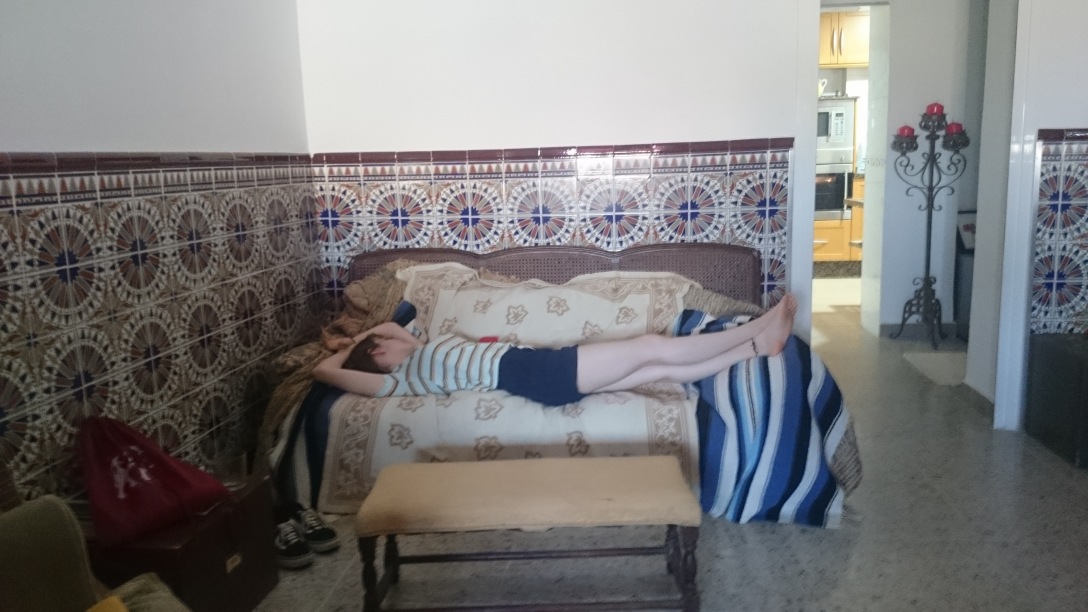 That was my friend Juan Jo’s main comment when he came to visit La Chanca at the weekend!

That combined with daughter Ellie spending a whole day asking me if I thought I would die from getting shot in the street brought a few doubts to my mind, but I roundly dismissed them.

Personally I think I am safer here than walking down a dark street in Birmingham.

Anyway, I survived, nay, enjoyed three great years at Birmingham Uni, plus half my career in the city. Perhaps that’s why I’m ok living in La Chanca!

So, Ellie has come to stay here for the holidays, teaching English at a summer school in the city.

This is how she feels after five hours of kids…

Mind you that’s how we’ve all been feeling in the heat wave.

The wind has been blowing like a hairdryer on full heat down the streets, bringing all the rubbish to land at my front door as usual!

The exterior doors have been hot to the touch and if I were earning any money at all right now I’d definitely be investing in aircon. (But I’m not so I’m convincing myself it’s healthier and more environmentally friendly just to adapt to changing weather conditions).

The heat has brought everybody outside at night, and the Noche de San Juan was one long fiesta accompanied by loud flamenco fusion music from dusk till dawn.

One enterprising group of mothers were filling a paddling pool for their kids on the pavement lower down in La Chanca – by opening a valve in water supply pipes on the outside of a building. Free water I guess!

The kids on my street have been out in force too, which was quite handy as Ellie and I paid two of the boys a euro each to unload the car for us on a hot night when physical effort was just a step too far!

There was also this chap riding his miniature pony up and down the street which made a nice change from the mini motorbikes. (Not so good for the pony though – another example of the different treatment of animals here.)

Talking of animals, Juan Jo also thought he saw a coyote running through the animal reserve opposite!

However we calmed down a bit after spotting the said coyote looking rather more like a sandy coloured German Shepherd type dog, but it gave us a laugh anyway.

I’m afraid La Cycling Life has taken a bit of a downturn what with the heat and giving Ellie a lift to work in the car to ease her pain.

I did take the bike to work one day only to find that the electric part wasn’t working! I was horrified as there was no way I was pushing it up the hill in 35 degrees, so I took a taxi home – only for Ellie to tell me later that she had switched the battery off as apparently that’s what you’re meant to do.

Ah well, one can’t be clever at everything!

6 thoughts on “There’s a strong smell of weed!”