I can hardly believe that I’ve been living in La Chanca for six months now.

On the one hand it seems like only yesterday that I was packing up my things and saying a tearful goodbye to the pets, but on the other it feels an age away.

Now is a good time to take stock, to see which of my aims or goals I am fulfilling, and where the path has taken a different turn.

The house here is working out really well. This week I even got wifi, after holding out for so long. It definitely makes you value things more when you have been without them – I was so excited when I saw all the little green dots light up in a row on my new router!

And Jeanne has been incredibly generous, bringing furniture and spare goods from her house over the last few months, culminating in an amazing wifi TV on which I finally watched Netflix last night. So much catching up to do!!

I still love the view of the castle and the sea, and I’m getting used to the community. Little by little I think I am becoming accepted as ‘la Inglesa’, and Jeanne doing up the house next door is also helping with integration.

We have a Moroccan guy from down the street doing some odd jobs for us, and we also got the “give me a euro” boy and his friend to help clean up after the builder for a bit of pocket money.

Then I had a neighbour call me in to look at their house – number 37 – that they want to try and sell. They thought I might know “foreigners” who could be interested!

There was a funny moment when they refused to show me inside a closed, windowless upstairs room. They said it was full of junk, but when I said I didn’t mind they were quite adamant – so I suspect it was full of something else!

Work is finally progressing relatively well next door, after a few weeks of frustrating false promises of “mañana” from our builder. Things came to a head when he came in limping, but adamant that nothing was wrong with him. We finally got it out of him that he had had a toe cut off! Something to do with him having diabetes. Anyway he seems to be recovering and is back on the job.

We also petitioned the council about the rubbish in the streets. We managed to get two guys from the rubbish collection department over to see for themselves, and they promised to clean up the bin area and bring more containers – and we won’t stop hassling them until they do!

So living-wise, it’s been a good decision. I sometimes miss my big house with its shady terraces, large living spaces, swimming pool of course in this weather, and definitely the dogs. But I do feel less alone here, and it’s been exciting to make the change.

I do still spend a lot of time going back to my home activities, my choir and orchestra, and because Jeanne is always coming backwards and forwards here with various guests, and I have plenty of friends visiting, I don’t feel I have had to really start a new life on my own.

That would have been a lot harder, as although I have joined choirs here, and I have a couple of work colleagues, to move to a new place and make new ‘real’ friends is difficult and takes time.

Work-wise, things are progressing slowly on the law front. I am doing quite a few residencies and driving licences but just like it took six years to train as a solicitor in the first place, it will also take time for me to qualify and gain experience in the law here.

So in the meantime I’ve just accepted an offer of a job with a language school in September! That will give me at least a basic income and security while I gradually build up in the law. And it will be fun to be around kids again and be in a team environment!

Talking of kids it’s been lovely having Ellie here over the last month, and Alex will be arriving soon too for the holidays, and we’ll spend some time together at home in Cariatiz.

So my mid life crisis is not going too badly! Even though I’m still fat and can’t wear any of last year’s summer dresses!

I did get accused of misrepresenting myself by one reader who met me for the first time last month. She literally was expecting a grey haired fat unattractive frump after reading my Time of my Life V. My Time of Life blog!

So Julia, just to keep you happy and not to misrepresent myself to any one else, here is a picture of me in my new comfortable summer dress!! 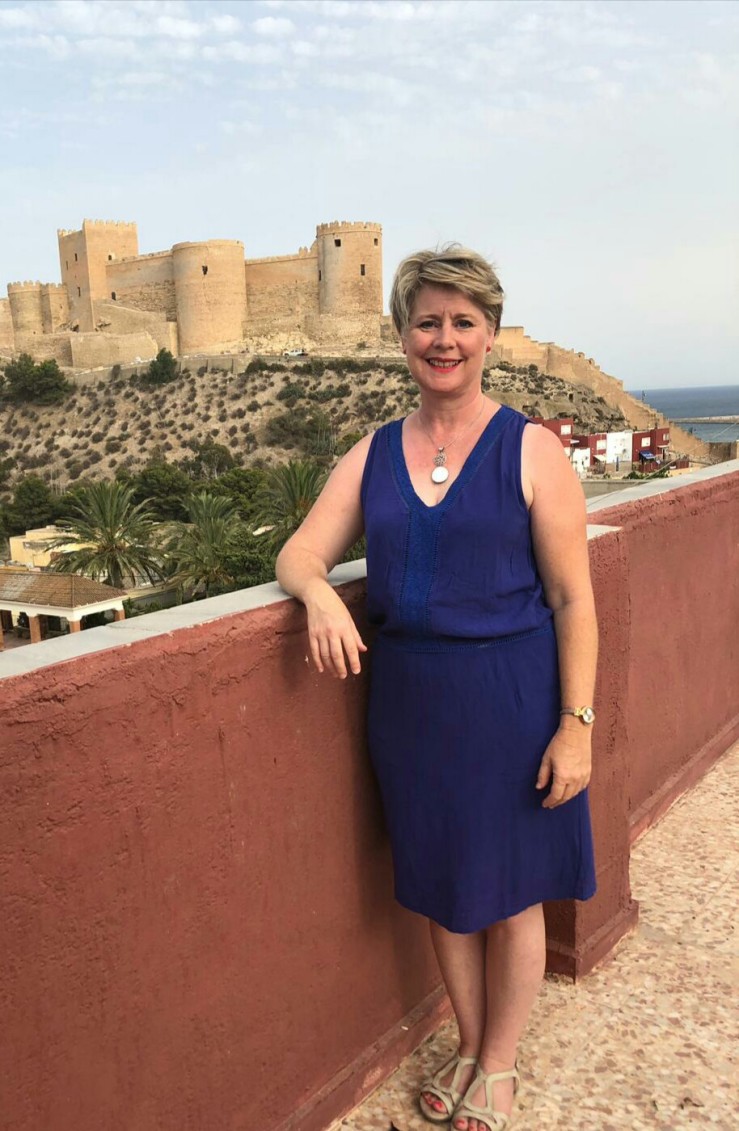 9 thoughts on “Six months in!”